Music is an artistic method of vibrating air. How fast, how much, and when the air is vibrated, determines what we will ultimately hear as sound. The science of this process is called acoustics.

When a speaker (or anything else that has the ability to vibrate) moves forward, the air molecules in front of the cone are compressed, causing the molecules to run into each other moving them all forward. This continues to happen until the speaker moves in the other direction, which causes a rarefaction (or thinning) of the air that was just compressed. This is the basic concept of how sound waves are produced.

When a speaker moves forward, backward and back to its original position, this is called a cycle. Frequency is determined as to the number of cycles per second. It is labeled Hertz (Hz) after an early scientist in the field of acoustics. Diagram 1 is a graphical representation of a sound wave. The top half of the curve is where pressure increases, the bottom half is the decreasing of the pressure. 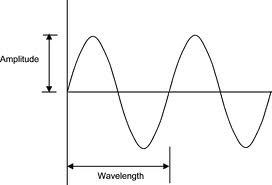 It has been determined that sound travels through air at sea level at a speed of 1128 feet per second. The wavelength is the distance a sound travels in one cycle. This distance can be determined by dividing 1128 by frequency. With this formula we determine that a 20 Hz note is 56.4 feet long. On the other hand a 20kHz (20,000 Hz) is .056 feet which is about 5/8 of an inch. Understanding this relationship between distance and soundwaves will be important in understanding how we hear, and therefore how to properly set up a sound system.

Yet another description of the soundwave is phase. Phase refers to the pressure change of the soundwave at a certain time and place. Once again, refer to diagram 1, and see how the first part of the curve is above the zero line. This is known as positive phase (increase of pressure). When the curve is below the zero line, it is known as negative phase (decrease of pressure). When Two or more waves combine the combination can be referred to as being in phase or out of phase. In phase means that the soundwaves are combining to form a wave that is larger than either of the two. When the waves are out of phase, meaning the phase of one wave is positive and the other is negative, they will subtract from each other, therefore reducing the pressure level. Soundwaves are constantly interacting with one another and creating what is known as a complex wave. All musical instruments create complex sound waves. The instruments combine waves to create the sound that makes them unique.

An octave is a doubling or halving of frequency. One octave up from 100 Hz is 200 Hz, where one octave down from 100 Hz is 50 Hz. A harmonic is a doubling (2nd harmonic), tripling (3rd harmonic), quadrupling (4th Harmonic... etc) of a fundamental frequency. Musical instruments (with the exception of synthesizers) do not create pure tones. The fundamental (main frequency) is combined with its harmonics at various levels to create the sonic signature of that instrument.

Our ears have a tremendous ability to evaluate sounds that range from very soft to very loud. The decibel (dB), named after Alexander Graham Bell, is a method of describing acoustic pressure, without having to deal with the billion-fold range of sound pressures to which our ears are sensitive. A Bel is the difference in loudness produced by a ten fold increase in power.

A decibel is 1/10th of a Bel. A doubling of sound pressure level (SPL) is a 10 dB increase, where a halving of SPL is a 10dB decrease. The human ear can detect differences as small as 1 dB, however 3dB is commonly referred to as a level where a change is readily apparent.

A doubling of power input into a speaker will produce a 3dB change in output, a doubling of cone area will result in a 3dB increase over that of a single driver.

A doubling of distance from a sound source reduces SPL by 6dB. A piano can produce soundwaves that range from 27.5 Hz to 4186 Hz. This means that a piano can produce just a little over 7 octaves of information. The audible spectrum of human hearing ranges from about 20 Hz to 20 kHz. This range varies from person to person, and generally deteriorates with age.

Information below 20 Hz is referred to as being subsonic. Although we can’t hear subsonic information, we can feel soundwaves that fall within this range. When a soundwave is above 20Khz, we refer to it as being ultrasonic. In this case, we are not aware that the wave exists (although some people can feel these frequencies). However small animals and electronic test equipment can “hear” these frequencies due to their extended high frequency “hearing”.

The Human Ear is made up of four basic systems; The Pinna, the auditory canal, the middle ear and the inner ear.

Soundwaves are collected by the pinna (outer ear). The pinna “amplifies” signals in the important speech frequencies as well as allowing us to better localize sounds.

The auditory canal channels soundwaves to the eardrum and increases the loudness of the soundwaves via an acoustical resonance around 3 KHz.

The middle ear acts as a matching device, to allow airborne soundwaves to be “heard” by the waterlike fluid of the inner ear. The ear drum forms one side of the middle ear. The ear drum acts as an “acoustic suspension” system, using the air trapped in the middle ear to control its movement. This trapped air is vented through the eustachian tube to the upper throat behind the nasal cavity. This system allows the air pressures inside the ear to equalize with the atmospheric pressure.

The cochlea is encased in solid bone and is coiled up much like a sea shell. The cochlea contains roughly a quarter of a million tiny hairs that give information to our brain as to what type of vibration there is in the fluid. Our brain then takes this information, analyzes it, and relates it to frequency and amplitude.

Our ears are not linear devices and what we experience as loudness varies with frequency. The relationship of these contours was originally studied by Fletcher and Munson at Bell labs in 1933. Refinements by other researchers have been added since that date. The contours show that our ears are less sensitive to bass frequencies, but that at higher sound pressure levels, the sensitivity to these bass frequencies increases.

By comparing arrival times at both ears, our brain can determine the direction from which a sound came from. A sound arriving at both ears simultaneously tells our brain that the sound is centered either in front, above, below, or behind us. The brain then looks at the frequencies received, and compares these frequencies with sounds that we have heard before. When the brain remembers a sound like the sound it just heard, it looks at the late soundwaves that arrived at the eardrum that were reflected off the outer ear. This process allows us to perceive height. When a soundwave comes from behind, the soundwave must pass through the pinna. This causes a filtering of high frequencies in comparison with reflections off of walls, ceilings, and floors. This is what allows us to localize sound sources behind us.

It becomes increasingly difficult to localize sound sources as the frequency decreases. This is due to the wavelength being so much larger than our heads, that it becomes difficult to differentiate between the arrival times at our ears. This effect keeps us from localizing pure tones below around 100 Hz. If the sound source is not pure, however, and there are harmonics associated with the source, we can localize these sounds and therefore localize the source.